I had a big problem with the clutch. With the engine running and the clutch pedal fully pressed it wouldn't go into gear. The engine revs would drop slightly which indicated the clutch was not fully dis-engaged.

Initially I thought there might not be enough travel so checked the clearance. There was plenty of clearance.

Next tried re-bleeding the clutch. Got a tiny (and I mean a tiny) amount of air out but didn't help.

I jacked the rear of the car up and started the engine with it in gear. With the clutch pedal pressed, the wheels continued to go round. By applying the handbrake I could get them to stop and keep the engine running by applying a bit of pressure on the accelerator pedal. This meant the clutch was only slightly engaged.

I was just about to consider taking the whole engine and gearbox out to start stripping it down when we tried one more test: with it in gear I got a friend to push the car as I slowly pressed the clutch pedal. Amazingly after a small amount of travel of the pedal the car rolled easily. After about 2/3 travel the car stopped. It seems the clutch somehow re-engages it you press the pedal too far.

I'd wasted hours of time but at least I didn't have a gearbox strip down! 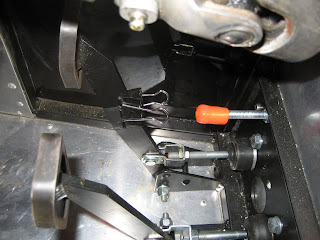 I put a rubber cap over the end of the bolt head and glued a piece of rubber around the pedal (the clip in the picture is holding it in place while the glue dries... must remember to take that off later!): 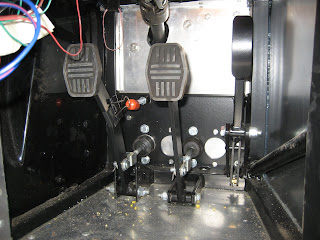 The official way to attach the front grill is to drill holes in the nose and use cable ties. I wasn't happy with that as the cable ties wold be visible so I fibre glassed mounting plates inside the nose code and attached using self tapping screws: 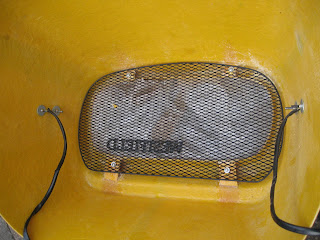 I was pleased with the result as there's nothing visible from the front: 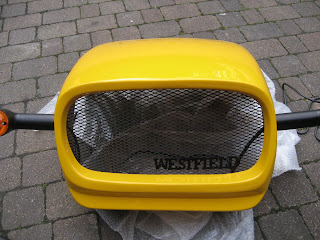 There are brackets that you fit inside the rear wheel arches that stop stones from getting in the gap between the chassis and the fibreglass body: 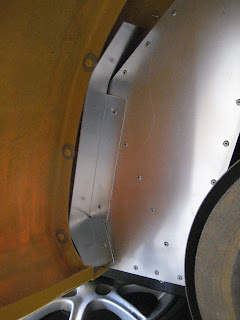