After going through the parts in the completion kit I realised they had sent me another gearbox mounting bracket rather than the bracket for the lower mounting of the air box.

Phoned Westfield and sent them through a picture of the 2 identical brackets. They agreed to send me the correct part though. 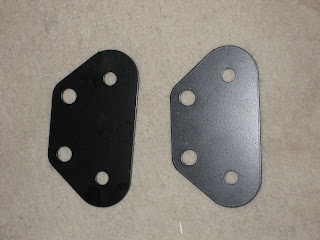 I also discussed several items that I thought would be in the kit but were apparently missing:

Air box to Plenum chamber connector - the manual is a bit vague about this. It describes re-using some of the existing pipe work but most builders seem to use a piece of convoluted piping (closest I can say is like the stuff you get on a tumble drier extractor pipe). Westfield said they do not supply a part for this.

Electrical connectors - I was expecting some connectors for the lights but there were none and Westfield do not supply them.

Steering Column fixing - I was expecting a U bolt for fixing the lower end of the MX-5 steering column. Westfield send me through 2 sizes (with the missing air box bracket). I'm now unsure if the part is normally included but was missing or they were being generous!
Posted by Graham at 21:34 No comments:

Of the 3 items that were out of stock when I collected the completion kit, the screen pillars and the dashboard came through the following week. Still waiting for the final part - the exhaust connector.
Posted by Graham at 21:31 No comments:

Early start for collection of the completion kit. My friend Martin, who formally had the Volvo estate which we used to collect the chassis (on the roof), who now has an Audi A4 estate (what do Top Gear say about Audi drivers?) picked me up at 6am.

A quick drive down the M6 and M5 and we were savouring the delights of a full breakfast in the Beefeater next to the Westfield factory.

There were a few items out of stock (exhaust connector, windscreen mountings and dashboard) so they are going to send those along in a couple of weeks. Everything else went easily in the back of the Audi estate.

I had a full list of questions to ask the guys at Westfield. The 1st of which was about the front mounting for the steering column. After looking at a chassis in the factory, we established the mounting had been welded onto the wrong part of the chassis. For the MX-5 SDV the mounting is farther back than on the standard SE chassis. The top mountings was correct (2 tabs rather than the single bracket). While we was there they fabricated a bracket which could be bolted onto the correct chassis member.

While I was there I looked at a LHD black MX-5 model they had in. I found out later that it was Gunther's (see the "Gust (Belgium)" link). It was in for a check over before going for its SVA. It was the 1st time I had seen an MX-5 based Westfield in the flesh. It's a shame it was LHD as I would have liked to see the routing of things like the steering column and brake line to the rear. Even so, we put it on the ramp so I could have a look at the diff/rear suspension and under the bonnet to see where some of the electrical items had been mounted and the routing of the air flow.
Posted by Graham at 13:45 1 comment: