Here are some picture of the donor: 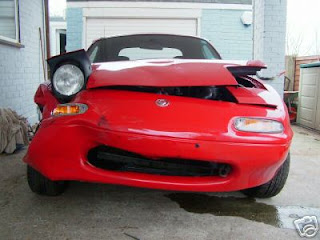 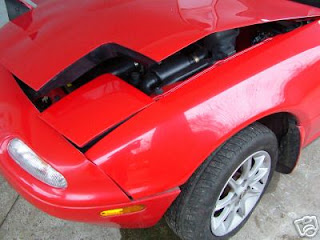 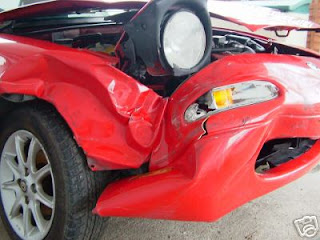 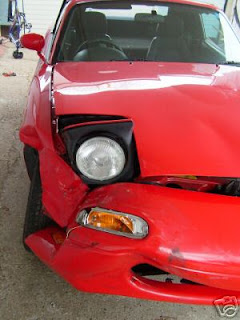 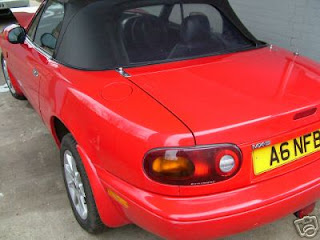 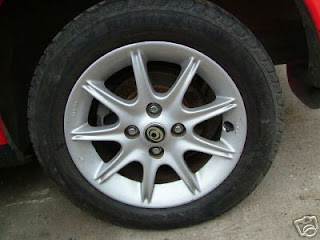 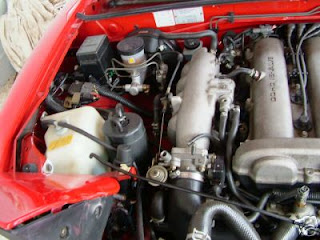 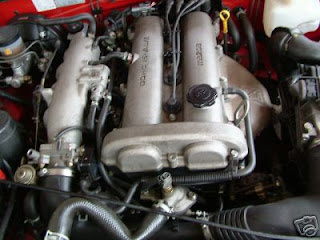 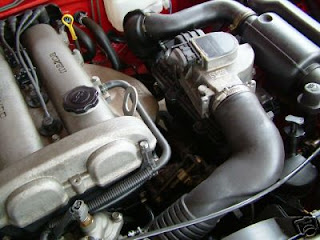 How to collect the donor?

Surfed the Yellow Pages for Vehicle Recovery Services to get prices for moving the donor to the in-laws. Best quote was £80.
Posted by Graham at 18:42 No comments:

Called Westfield and ordered the Build Manual.
Posted by Graham at 13:39 No comments:

The car was in Essex (South East of England). I live in the North West about 225 miles apart. What to do? My in-laws live in Essex so negotiated with them to put the car there while I take off the bits I need. They have an area by the side of the house but no garage so it will be out in the open. We travel down every few weeks so plan to take the MX5 apart bit by bit and transport the parts back up north. Paid for the car with PayPal and found the seller worked for the same company as me (small world!).
Posted by Graham at 18:42 No comments:

I decided that I would need some more information about the MX5, both for dismantling and for engine maintenance in the future.

There had been a couple of previous bidders but nothing for the last couple of days. I put a bid in 10 min before the end. 10 min later and £560 lighter I was the proud winner of an un-drivable MX5.
Posted by Graham at 18:42 No comments:

Sent an email to Westfield asking if the 1998 model was suitable for the SDV (it only say pre 1996 in the literature). Their reply was: "We can supply a kit to use both pre and post 1995 Mazda MX5’s. If you want to use the post 1995 car then you will need to upgrade to a cat exhaust silencer." Not sure how much that will cost, will find out later!
Posted by Graham at 18:41 No comments:

Here was the eBay description:

1998 MAZDA MX5 DAMAGED SALVAGE CAT B - for parts only. You are bidding on a Mazda MX5 red which had been hit by a twat causing the car severe damage. Repairable salvage insurance categories has registard my baby stuart little type car category B - NOT FOR RESALE. DAMAGED BEYOND ECONOMICAL REPAIR AND/OR SEVERE STRUCTUAL DAMAGE. PARTS CAN BE REMOVED AND SOLD. This vehicle you are bidding on is for parts only and DOES NOT INCLUDE THE PERSONAL PLATE. As you can see from the genuine pictures the car has been hit in the off side wing causing damage to both wings and front. The back is not damaged. The engine has done 61800 which is low for its age. Before the accident the engine was crisp with no problems. See pictures or in person. The car can be viewed prior to placeing a bid - please mail for details. So to recap; - This car is being sold for parts only. You can not fix and put back on the road the DVLA will not allow - The personal plate is not for sale and does not come with the car. - The car can be viewed, please mail for details. No time wasters please this is my personal car I am not a business. - Collection only. - Cash on collection or money paid through paypal 7 days prior to collection. - No 'can i pay with bankers draft' scam either. Thanks for looking. Happy bidding.
Posted by Graham at 18:41 No comments:

I'd been looking at the Westfield MX5 SDV for some time but never plucked up courage to do anything about it, and to be honest I hadn't a clue where to start. On a lunchtime surf on eBay I found a 1600cc 1998 damaged insurance Cat B write-off. 62k miles on the clock. Emailed the seller to clarify other than the bodywork, what was damaged, he replied saying the radiator had gone but all the other mechanical parts were okay but the extent of the bodywork damage meant it was a write-off. Starting price was £500, no bidders so far and it had been on for a week.
Posted by Graham at 18:40 No comments: